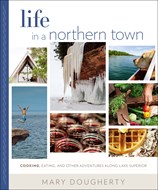 Having lived my entire life on the southern shore of Lake Ontario, I was drawn to this lovely book about Great Lakes life on the shores of Lake Superior. I was curious to see if there were similarities, despite the distance between western New York and the upper peninsula of Wisconsin. In many ways, this was like reading my own life, and I finished this exquisite book feeling as though Mary Dougherty and I are old friends.

Dougherty – a former restaurant owner, blogger, Mom to 5, and activist – has written a sumptuous, supremely readable cookbook/memoir that is organized by seasons. It has been a very long time since I’ve read a cookbook that better reflects the life lived by the author, and Dougherty has done a remarkable job of connecting the food and the people of Bayfield, Wisconsin to the land and the Lake.

While living in a remote, small town of less than 500 people, Dougherty has managed to stock her pantry with exotic spices and fill her kitchen with adventurous cooking, blending local with global in an appealing, delicious melange of meals ranging from Thai Corn Chowder to Whitefish in Foil. Enhanced by gorgeous photography and a chatty style, this book takes you deep into the forest and then out on the blue water of Lake Superior, through all four seasons. Dougherty is my kind of cook – while all the recipes are detailed enough for a beginning cook, she makes a point of encouraging the reader to experiment, taste, and adjust as necessary. Some of the recipes are familiar (Nicoise Salad in a Jar), but the stories accompanying nearly every recipe create a moment that makes each special.

I was pleasantly surprised at the commonalities I found between Bayfield, Wisconsin and western NY. I know that many early settlers in the western NY region eventually migrated west, and I’m betting that some of them ended up in Wisconsin. Here are just a few of the familiar things I discovered here:

It’s rare that I highlight the text in a cookbook, but Dougherty’s witty prose is as good as her recipes. Here are a few gems that I enjoyed:

Mary Dougherty has produced a fabulous, readable cookbook/memoir that I will go back to again and again. Her sense of family and community is refreshing, and her creative approach to cooking is totally authentic. The recipes are interesting and delicious, and mostly suitable for beginning cooks. I used a digital advanced copy for this review, but will be buying this book in hardcover and probably giving a couple as Christmas gifts this year. I’ll end with a lovely quote that touched my heart:

I never expected quiet perfection because I knew the good stuff always comes from the messy and brilliant business of living a life in a way that brings you to your knees in gratitude every now and then.

3 comments on “Life in a Northern Town by Mary Dougherty”

Reading for Fun: The Source of Self-Regard by Toni Morrison; The Raconteur’s Commonplace Book by Kate Milford

Watching: Wild Bill on BritBox – Rob Lowe is fantastic in this role! Gearing up for Masked Singer.