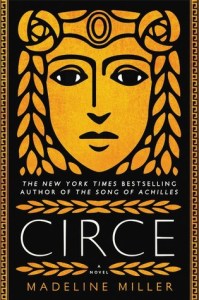 My introduction to Greek history and mythology happened in 4th grade, and I was immediately hooked on the stories of gods and heroes. I clearly remember borrowing D’Aulaire’s Book of Greek Myths from the library over and over, reading about Ariadne, Theseus, Hercules, Jason, and Athena. Then I discovered The Odyssey a few years later and was entranced by Polyphemus the Cyclops, the Sirens, Calypso, and Circe, Witch of Aiaia.

While I can’t say Circe was a favorite character in my adolescent myth reading, she has been mentioned in some books I’ve read over the years as the “source of power” in lines of women who practice the healing arts, so I was intrigued when I heard about this book.

Miller presents Circe as a complicated character here, a lesser god by birth – daughter of the Titan Helios and the nymph Perse – but the object of ridicule and subject to what can only be described as low self-esteem. She lives in hope of being noticed and praised by her father and craves basic kindness and love, but at the same time refuses to be cowed by the cruelty shown by her brothers and sister.

In her quest for love, she concocts a potion using flowers born from the blood of gods to turn a human into his true, godly self. Unfortunately, once he becomes a god, he does not choose Circe for his mate. Consumed with jealousy, she brews more of the potion and succeeds in turning the object of his affection into the monstrous Scylla.

As punishment for this act, Circe is banished to the island of Aiaia for all eternity. Her use of a potion to create a monster is feared by the gods, who foresee that “witchcraft” can harm them. On the island, Circe makes a home for herself among the wild animals, teaching herself about herbs and witchcraft. Centuries pass, and Circe learns more and more about mortals and gods, until she meets Odysseus who transfixes her with his stories and adventures. Circe’s relationship with Odysseus comes full circle when his wife and son, Penelope and Telemachus, arrive on Aiaia, forcing Circe to examine her own life and consider her future.

The most striking thing about this story is the humanness of Circe and how the self-centered ways of the gods are misguided, dangerous, and hurtful. She is let down again and again by her father, her uncles and grandmothers, her brother, her sister, Odysseus, and, finally, by her son but she still is willing to offer second (and third and fourth) chances for people to be good to her.

Admittedly, her willingness to let people take advantage of her or treat her badly can wear on the reader, but her final confrontation with her father makes it all worthwhile. Circe’s weakness, in the eyes of the gods, is that she loves too much and she wants to be loved in return. By the end of the book, she has stopped apologizing for that and embraced that as a strength.

Miller’s writing is engaging and lyrical. She is true to the Greek myths and epics, and sprinkles heroes and gods like salt throughout the story. It’s refreshing to examine the Greek myths from a woman’s point of view, and Miller is not always kind to our male heroes. Theseus and Jason fare particularly badly at her hands.

This would make a really interesting “buddy read” with The Odyssey. It would certainly spark some lively discussion about the roles and situations of women in history. I can’t decide if it’s empowering or infuriating to read about a female “god” who is treated badly because she’s not beautiful or clever. At its core, Circe is about a woman finding her own power and taking control of her own life, which is what makes this such a satisfying read.

1 thought on “Circe by Madeline Miller”