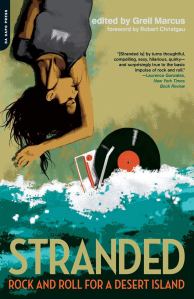 “He triggers memories like you were a jukebox and he was the man with all the quarters.”
This quote comes from an amazing book that I have just rediscovered: Stranded: Rock & Roll for a Desert Island by Greil Marcus.

Sometime in the 70’s, Marcus decided that it would be really cool to ask music critics and performers what music they would absolutely have to have if they were stranded on a desert island. This book is a compilation of those answers, and it contains some brilliant essays on rock and roll and the people who made it part of the fabric of our lives.

Most notable is the astonishing essay by Ariel Swartley, “The Wild, the Innocent and the E Street Shuffle.” She dissects Springsteen and his band at a time when they were at their most raw. This was before The River (quite possibly the most perfect album ever made) and Born in the U.S.A., back when Bruce and the boys were still those grungy “boy-prophets” from the streets of New Jersey, before Bruce married and divorced a super-model, before he had kids and moved to Beverly Hills, before he became kind of ordinary.

The whole book is filled with essays like Swartley’s, and it is a psychadelic memory romp that includes music as diverse as the Ronettes and the New York Dolls. If you were alive and listening in the 70’s, you need to read this book. It will make you remember what it was like to feel the music you listened to.

It’s believed that certain smells can trigger strong memories. I believe the same is true for certain songs. There are songs that always take me back to a certain time, place or person. For instance, Carly Simon’s You’re So Vain takes me back to the parking lot of Grants on Jefferson Road, Rochester, NY oh, maybe 1973. It was the first time I heard a song that made me want to stay in the car and listen instead of heading inside with my mother. Then there’s Peter Gabriel’s Solsbury Hill, which transports me to 1983, and the Journey’s End bar in Canton, NY with Tom Wanamaker, Jeni Armeson, Mary Foster, Liz Yeomans, Mike Collins, and Alan Haberstock. And of course, Genesis’ Follow You, Follow Me always puts me in 1985 at the bar of the Holiday Inn at the Airport in Rochester, with Cosmo. Very likely the night we fell in love, so this is a suitable post for Valentine’s Day!