A few months ago, sociologist Eric Klinenberg wrote an opinion piece for the New York Times called “To Restore Civil Society, Start with the Library” and subsequently published the book Palaces for the People which describes his work around the concept of social infrastructure.

News of both publications immediately started flowing into my email box and social media feeds. The concept of public libraries as social infrastructure captured the attention of many people. As I read Klinenberg’s book, I recognized many of the concepts library leaders have for decades struggled to communicate to funders and stakeholders. Libraries aren’t always thought of as “essential services” when municipalities are facing difficult budget years, so having a different way of describing what libraries do as “infrastructure” is very valuable.

Klinenberg defines social infrastructure as “physical conditions that determine whether social capital develops and whether human relationships and connections are formed.” Simply put, it refers to places or things that bring people together, that help create a community. Libraries are an example. What happens when people gather in these places? People who are very different from each other come together and become part of a community. They very likely have differing political and religious views, support different sports teams, watch different television shows, or read different kinds of book. The *place* brings them together.

In his book, Klinenberg primarily gives examples of how people benefit from the social infrastructure created in certain places. He talks a lot about neighborhoods and opens Palaces for the People with a data story he collected on a deadly heatwave in Chicago. More people died during that event in neighborhoods he describes as “forgotten.” These are neighborhoods where there is little to no interaction among the people who live there and where neighbors don’t know each other because there are no places for them to gather. There were no relationships bolstered by community spaces so no one checked on each other to make sure people were okay during the heatwave.

Klinenberg singles out public libraries as the ultimate example of social infrastructure that works. He provides example after example of how people connect at libraries. One woman he interviewed described the library as a “place of permission” where you can follow your own interests and not be pushed in a certain direction. Libraries are a place that is judgement free, where you can explore whatever interests you.

Libraries in Monroe County have a long and rich history, and most of our mayors and town supervisors and other entities responsible for funding our libraries understand the role libraries play in community and are committed to keeping our doors open.

Years ago, when I worked at the Ogden Library in Spencerport, I was doing some research for a book. I learned that when the Town of Ogden was founded in 1815, the first three institutions created were a church, a school, and a library.

Imagine that group of pioneers, who had literally cut their way west from Connecticut and Massachusetts through untamed wilderness, arriving in Ogden, building their homes, then setting about creating a community. I think it says a lot about those pioneers that they created a library in the middle of the wilderness. They knew that a library would provide something valuable and necessary in their new community.

Today, public libraries all over the world are providing social infrastructure for their communities. In Monroe County, there are dozens of examples of the library creating and enabling communities to form.

People who live in Rochester’s 19th Ward point to the Arnett Branch as an anchor in their community. The library provides a safe space for children to gather after school where they are supervised, fed, and given homework assistance until picked up by their parents after work is done for the day. Adults can apply for jobs, or participate in a writing group. Teens learn about college and work opportunities. All ages come to play. A local artist, Richmond Futch, has created beautiful murals on the exterior of the library, which only reinforces the role of the library as a community anchor and has made the library a selfie destination. 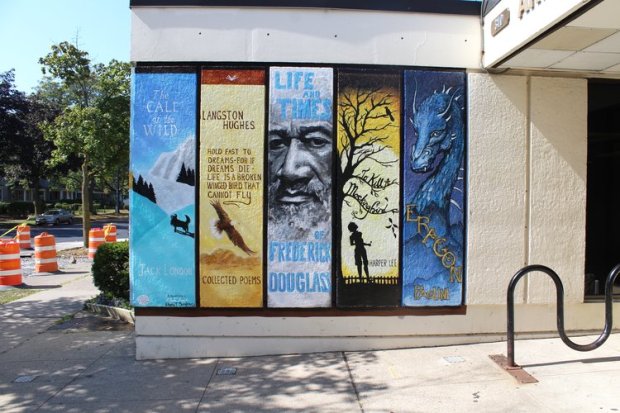 The Phillis Wheatley Community Library is located at the corner of Ford Street and Dr. Samuel McCree Way in Rochester. In 2017, a community project called the Storywalk was completed there, where children and families created a story that is told through kiosks alongside the building and enhanced by gorgeous sidewalk murals that were painted by community members. This project brought dozens of people together and gave them ownership of the library. The people who live nearby consider library staff as family and the library as home. Recently, I was present at Wheatley when there was a shooting outside and several bullets hit the windows of the library. The library was locked down by police with no one in or out. Once the doors opened again, I was astonished and deeply moved by the crowd of neighbors who rushed in and enveloped staff members in hugs, making sure they were okay. The library staff and neighbors are like family.

The Monroe Branch recently started a new service that relies on the kindness of strangers. They took an empty book cart and put some canned food and couple loaves of bread on it with a sign that reads “Take what you need. Leave what you want.” It is available for anyone who is in need and gives community members an opportunity to give to those who are in need. This is the result of staff noticing an increase in the number of homeless and hungry people taking shelter in the library.

Perhaps one of the most powerful aspects of social infrastructure when it is applied to libraries is that library space requires people to confront radical differences in a shared space. Nowhere is that most evident than at the Central Library of Rochester and Monroe County. At Central you are guaranteed to run into to someone who is vastly different from you. A person might be homeless, or of a different ethnicity, or transgender, someone with mental health issues, lawyers, doctors, techies, business people, young mothers, teens, grandparents, and so on.

Everyone is welcome there, and we attempt to provide the right service at the right time to the right person. When Midtown closed in 2008, the Central Library became the only public place downtown with clean restrooms, and where it’s warm in the winter and cool in the summer. That meant we had a great influx of homeless and transient people who no longer had Midtown as a hangout. Instead of viewing these newcomers as a problem, we adapted our services to help them. We created Health Central on the 3rd floor where people who need help can get connected to healthcare, housing, and legal assistance. We have Nurse Barb on duty a couple days a week. She’s a retired nurse who volunteers her time to take vitals and counsel people on their health needs. Central is also now a regular stop for mobile health services providing dental care and mammograms.

I am sometimes confronted with people who resent the inclusiveness at Central and see it as threatening. I have had librarians from suburban libraries say they will never attend another training session at Central because it’s too dangerous. I’ve had an older gentleman tell me he doesn’t understand why we allow “young thugs” in the library, and have had people voice objections about sharing space with the homeless. These reactions are based in fear of the unknown, and sometimes people are willing to learn, sometimes not. The people who are comfortable with the stew of visitors to Central outnumber those who are afraid, as seen in our annual attendance numbers, which top 600,000 visits. More visits than all our sports stadiums, more than Strong Museum, more than the Zoo.

How does all this fit with the concept of social infrastructure?

Libraries are adapting services in response to community needs and activities. We are creating community. Most libraries do that very deliberately, but libraries have also shown up during times of crisis.

When Superstorm Sandy hit the downstate region, the NYC boroughs were devastated. In Queens, many libraries were flooded, and some destroyed. Within days of the storm, Queens librarians had opened libraries and became disaster centers in their neighborhoods, handing out food & clothing, providing electricity for people to charge phones, and doing storytimes in makeshift encampments to entertain weary and bored children.

When riots erupted in Ferguson and Baltimore, libraries stayed open and provided safe spaces for neighbors afraid for their lives. And then those libraries turned around and started discussions on race and healing, providing a safe space for people to have hard conversations.

Libraries provide valuable social infrastructure in a community, not only by the things they provide, but by the experiences offered and the people who offer them. When the Rochester Public Library conducted a study of branch facilities and services last year, the overwhelming response from community members when asked what they liked the most about their library was….STAFF. Our staff are our lifeblood. It is through them that community is created.

Visiting a library will remind you that there are different people with different ideas out there, and that is not a bad thing. Libraries allow communities to form and reform organically. New parents connect at baby storytimes, people looking for work help each other out, kids come together to learn about any number of things. Adults come together to discuss books, for craft classes, or to build with legos and end up forming new friendships that extend outside the library.

There is emerging research on the alienating effect of the internet on human behavior. Anyone who is on any social media platform has probably experienced a “troll” – someone who deliberately says nasty things to elicit a negative response. The relative anonymity of online communication has provided an outlet for the worst in us. It’s easy to say something hurtful when you don’t have to look someone in the eye. I see people looking for alternatives, and they are looking back into their communities for opportunities to connect in real life with other people. What better place to do that than the public library?

Social infrastructure – real community – provides an alternative to that kind of negativity. Klinenberg ends his books with this: “We need smart civil engineering to fix the critical networks that are failing, but we also need to engineer civility in societies that are at risk of breaking apart.” Libraries can provide a conduit for growing that civility.

Reading for Fun: The Scorpion’s Tail by Preston & Child

Most Anticipated Books: The Conductors by Nicole Glover; The 100 Years of Lenni & Margot by Marianne Cronin;  The Hidden Palace by Helene Wecker (Golem & Jinni #2!)