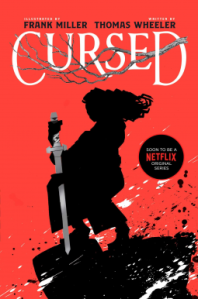 Whosoever wields the Sword of Power shall be the one true King.

But what if the Sword has chosen a Queen?

Nimue grew up an outcast. Her connection to dark magic made her something to be feared in her Druid village, and that made her desperate to leave. That is, until her entire village is slaughtered by Red Paladins, and Nimue’s fate is forever altered. Charged by her dying mother to reunite an ancient sword with a legendary sorcerer, Nimue is now her people’s only hope. Her mission leaves little room for revenge, but the growing power within her can think of little else.

Nimue teams up with a charming mercenary named Arthur and refugee Fey Folk from across England. She wields a sword meant for the one true king, battling paladins and the armies of a corrupt king. She struggles to unite her people, avenge her family, and discover the truth about her destiny.

But perhaps the one thing that can change Destiny itself is found at the edge of a blade.

The Lady of the Lake is the true hero in this cinematic twist on the tale of King Arthur created by Thomas Wheeler and legendary artist, producer, and director Frank Miller (300, Batman: The Dark Night Returns, Sin City).

I don’t think I’ve been as excited about an Arthurian book since Mists of Avalon!

Cursed gives a whole new take on the old legends of King Arthur and focuses on Nimue, the Lady of the Lake or, in some versions, Merlin’s lover. We first see Nimue as a child, living in a nurturing environment still following the old ways of the Druid. The first chapter is a violent introduction to the unconscionable acts of cleansing and conversion carried out by Christian priests and monks in the Dark Ages. The violence is startling, made especially so by the immediate change in tone in the second chapter as the storyline fills itself in, then pushes forward with Nimue as warrior and defender of the old ways.

All the expected characters appear, but in clever and fascinating new ways. The narrative itself moves fast and holds you tightly as you read page after page, oblivious to time because you just have to know what happens next. Complemented by magnificent illustrations, the story wraps around you until you can’t think of anything else. Arthur fans will devour this, but so will Game of Thrones fans missing that world. Highly recommended.

Publication Date: October 1, 2019
Published by: Simon & Schuster Books for Young Readers
Thanks to Netgalley for the review copy

Reading: The Hacienda by Isabel Canas