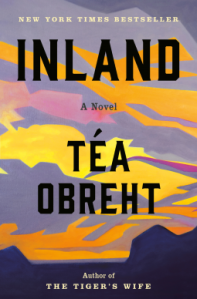 From the Publisher: In the lawless, drought-ridden lands of the Arizona Territory in 1893, two extraordinary lives unfold. Nora is an unflinching frontierswoman awaiting the return of the men in her life—her husband, who has gone in search of water for the parched household, and her elder sons, who have vanished after an explosive argument. Nora is biding her time with her youngest son, who is convinced that a mysterious beast is stalking the land around their home.

Meanwhile, Lurie is a former outlaw and a man haunted by ghosts. He sees lost souls who want something from him, and he finds reprieve from their longing in an unexpected relationship that inspires a momentous expedition across the West. The way in which Lurie’s death-defying trek at last intersects with Nora’s plight is the surprise and suspense of this brilliant novel.

Mythical, lyrical, and sweeping in scope, Inland is grounded in true but little-known history. It showcases all of Téa Obreht’s talents as a writer, as she subverts and reimagines the myths of the American West, making them entirely—and unforgettably—her own.

Obreht’s storytelling is at its finest in this magical and gritty tale of two unlikely heroes who inhabit entirely different worlds. Obreht moves back and forth between Nora, a frontierswoman possibly abandoned by her husband and adult sons trying to keep herself and young son alive during a drought and Lurie, an orphan, outlaw, and cameleer trying to stay a step ahead of the law and alive.

Both Nora and Lurie navigate their way through life aided by “ghosts.” For Nora, it’s the ghost of her dead daughter and for Lurie, it’s primarily the ghost of his adopted brother who died of typhoid. Nora’s ghost, Evelyn, acts as a sounding board for Nora, allowing her to test ideas and often tempering her wilder ideas. Lurie’s ghost, Hobb, goads him into theft by instilling an undeniable want that Lurie cannot resist.

While I kept expecting the two stories to come together sooner and in a stronger way, the way things turned out was really pretty perfect. This stands tall along with recent American West stories News of the World and Whiskey When We’re Dry. Recommended.

“As it should be, the landscape of the West itself is a character, thrillingly rendered throughout. . . . Here, Obreht’s simple but rich prose captures and luxuriates in the West’s beauty and sudden menace. Remarkable in a novel with such a sprawling cast, Obreht also has a poetic touch for writing intricate and precise character descriptions.”—The New York Times Book Review (Editors’ Choice)

“Obreht is the kind of writer who can forever change the way you think about a thing, just through her powers of description. . . . Inland is an ambitious and beautiful work about many things: immigration, the afterlife, responsibility, guilt, marriage, parenthood, revenge, all the roads and waterways that led to America. Miraculously, it’s also a page-turner and a mystery, as well as a love letter to a camel, and, like a camel, improbable and splendid, something to happily puzzle over at first and take your breath away at the end.”—Elizabeth McCracken, O: The Oprah Magazine

Publication Date: August 13, 2019
Published By: Random House
Thanks to Netgalley for the review copy