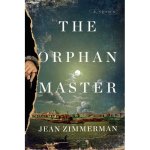 I was intrigued from the very first exposure I had to The Orphanmaster by Jean Zimmerman, primarily because I am a New Yorker and totally enamored with the history of my state. That, combined with all the elements I love in a story – mystery, murder, romance – how could I not read this?

I was not disappointed. At all.

The Orphanmaster didn’t grab me right away, however. The first chapter detailing the activities of spies and assassins dispatched across the globe to hunt and murder the men who authorized the execution of Charles I of England, kind of left me cold, but as I read further, it became clear why Zimmerman began the story in this way. Edward Drummond, our hero, is one of those spies and his activities in New Amsterdam and New England are driven by his mission to hunt three regicides who have taken refuge in the New World. It also didn’t hurt that the second chapter contained one of the most frightening scenes I’ve read in a book since Peter Straub’s Ghost Story.

What did immediately capture my attention was the character of Blandine van Couvering, a she-merchant (don’t you love that term?) trader and an orphan who moved easily and confidently through the hard scrabble world of early New York. It is through Blandine that the story gets it red thread – the thing that holds it all together. And what a character! Strong, independent, kind, beautiful (of course), a superb housekeeper, a skilled negotiator – a woman making her way in a man’s world. What I appreciated the most about Zimmerman’s treatment of Blandine were the references to the role of women in early Dutch culture. Blandine was not an anomaly. Under Dutch rule, women were allowed to work, to own property, and to choose their own husbands.

Blandine and Edward find themselves smack in the middle of a rash of child killings and disappearances – all of orphans. Blandine’s mentor, Aet Visser, the Orphanmaster of New Amsterdam, is involved, but we don’t know how deeply until well into the story. Zimmerman draws a vivid picture of a man conflicted as we watch Visser tumble into despair. Add to that several other well-drawn characters – Martyn Hendrickson, the handsome, dashing patroon who cannot be tamed, Kitane, a Lenape trapper afflicted with a horrifying mental illness, and Lightning, a terrifying half-breed – and you have all the elements of a thriller.

There are a number of gruesome scenes in this story that could and should repulse the reader. This is, in an odd way, a 17th century Silence of the Lambs, but Zimmerman uses the horrifying actions of the killers to create a suspenseful, nail-biting story that had me guessing to the end. There are a lot of elements at work here besides the child killings, but all the loose ends are tied up in a frenzied ending that left me wanting more from this author. I was also pleasantly surprised to find Blandine and Edward ending their days in Honeoye, a lovely area quite near where I live.

It’s been awhile since I had trouble putting a book down, so I appreciated the combination of riveting story and skillful telling. Highly recommended.

Reading for Thinking: The Writer’s Library by Nancy Pearl

Most Anticipated Books: Simon the Fiddler by Paulette Jiles; The Promise Witch by Celine Kiernan; Magic Lessons by Alice Hoffman