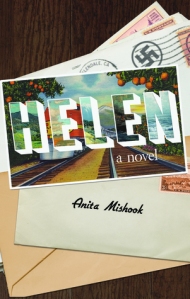 “A dream turned inside out. That was California.” Helen Rice, the protagonist in Anita Mishook’s masterful debut novel, Helen, certainly finds truth in this statement. We first meet Helen as she travels from New York to California to join her older sister and her family in lovely Glendale, California. The sisters, Polish Jews orphaned jointly by the Great War and influenza, survived great hardship and made it to New York, where Sarah labored to ensure Helen acquired the best education possible. Now an adult, Helen finds herself drifting and decides to join Sarah, her husband Harry, and their two children in the land of golden opportunity.

However, Helen soon learns that sunny California has a dark and dirty underbelly which includes gangers, corrupt cops, and Nazis. Helen, passing as a “Good German Girl,” becomes the darling of a dangerous group of Nazi supporters known as the Silver Shirts. At the same time, Helen’s friend from New York, a spy for the Anti Defamation League, arrives and immediately enlists Helen as a spy. Helen, by default, begins to live a dangerous double life, culminating in foiling a Nazi plot and triggering a new life as a double agent.

Mishook, a psychologist, developed Helen’s story out of research into her own family history. She uncovered evidence of the emergence of an American Nazi Party in California in the 1930s as she researched her mother-in-law’s immigration from Poland to California, and spun that family history into a readable, informative novel. There are wonderful and disturbing nuggets of historical information here about the motion picture industry and American Nazis, much of which I never knew. Mishook’s writing is smooth and conversational, and she handles dialog well, especially given this is her first novel. The character development is skillful, resulting in some very well-drawn personas. Helen, for example, walks a fine line between irritating, charming, shallow, and badass. She’s a rather vain, unformed young woman who has drifted through her life pretty much guided by her older sister. We watch her move from uncertain girl still depending on older sister Sarah to tell her what to do, to a more confident, daring young woman who has a purpose.

Other characters like Harry and Ralph are interesting, while Joe and Winona could have used a bit more development. However, these characters all fit their roles just fine and contributed what was needed to the story. If I have one quibble with this story, it’s a small one. Sometimes authors really, really like a descriptive phrase and tend to repeat it multiple times throughout a book. That happened here, with the author repeatedly describing Helen as “chewing the soft interior of her cheek/lip” during moments of uncertainty. By the end of the book, the inside of Helen’s mouth should have been a bloody pulp if she chewed her cheek so much! But, that is a minor quibble with an otherwise wonderful book. I hope Mishook continues to produce novels and am looking forward to her next one! Recommended.

Reading for Thinking: You’re Not Listening: What You’re Missing & Why It Matters by Kate Murphy