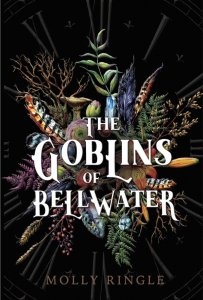 How could I resist a book inspired by one of my all-time favorite pieces of writing, Christina Rossetti’s Goblin Market? Molly Ringle’s reimagined Market takes place in the forests of present day Washington State, where we are introduced to Kit Sylvain, a young man bound by a family curse to take care of a tribe of goblins. By “take care of” I mean provide them with gold or whatever else they want to prevent them from messing around with the nearby humans. Sometimes it works, sometimes it doesn’t, since goblins are wily, deceitful creatures.

While Kit is tending to the goblins, sisters Skye and Livy Darwen have grown up in the small town of Bellwater, and spend hours exploring the forest, where they imagine “teeny-tinies” call to them. One day, Skye follows a path that wasn’t there before, drawn by the call of the “teeny-tinies,” which turn out to be goblins who ensnare her into their world. Kit, Livy, and Grady (Kit’s cousin who is unwittingly drawn into Skye’s drama) eventually come to understand that Skye has been cursed and join forces to keep her from becoming a goblin.

The story is fresh and engaging, and the characters well-written. Ringle skillfully develops four likable characters and weaves their stories together to an exciting, nerve-jangling ending. The story moves along at a rapid pace, with the current dilemma of Skye’s curse being nicely woven into the older story of how the goblins became attached to Kit’s family. I especially liked the fact that all four of our heroes were essentially saved by the first goblin “victim” who was snared so long ago. There’s an extraordinary amount of sex here, more than I expected, but it fits with the darker side of fairytales that few dare to tell, and creates a sizzling romantic side to an otherwise folklore/fantasy-heavy story.

I give Ringle props for taking an old story and hanging new skin on it. This will appeal to fantasy fans, for sure and would make an awesome graphic novel. Highly recommended.

4 thoughts on “Goblins of Bellwater by Molly Ringle”