The Unforgotten by Laura Powell – What a ride! This is a book that forces you to pay attention, which really isn’t a problem because you will want to keep turning those pages. The story begins with Betty Broadbent, a young girl who suddenly finds her quiet life in a small Cornish village turned upside down by a series of grisly murders. The local hotel run by Betty’s mother becomes de facto headquarters for the journalists who descend on the town, and that’s where Betty meets Gallagher. The two fall into an unlikely and unpredictable relationship/friendship as the search for the “Cornish Cleaver” goes on. While I expected a tightly written mystery, I got that plus a really well-crafted story about obsession, madness, and guilt. I found the characters charming at first, then a little irritating, then a little scary and suspicious. The author does a good job of blending past and present, and skillfully demonstrates how the past never really leaves you. I’m not often surprised by endings, but this one had me gobsmacked. Really, really good.

Publication Date: February 6, 2018
Published By: Simon & Schuster/Gallery Books
Thanks to Netgalley for the review copy

Island of the Mad by Laurie King – I’ve been a fan of Laurie King’s Mary Russell series for years, but the last couple felt a little played out. This one, unfortunately, continued that trend. Here, Mary is contacted by an old, dear friend whose beloved Aunt Vivian has disappeared. Vivian, who has been a resident of an asylum for years, was visiting family when she disappeared along with some jewels and other items from her brother’s safe. Russell is called upon to find the Lady Vivian and recover both the lady and the jewels. This involves an undercover stay in Bedlam (the asylum where Vivian lived for years), fascism in Britain and Italy, and Cole Porter. While the story was entertaining enough, it didn’t spark like previous books. The younger Russell would have twigged on the reason for Lady Vivian’s “madness” long before this Mary Russell figured it out. I found myself shaking my head at her thickness by chapter 4. I think it’s time to move on.

Publication Date: June 12, 2018
Published By: Random House Group/Ballantine/Bantam
Thanks to Netgalley for the review copy

Dark Angel by Elly Griffiths – I’ve loved Griffiths’ Ruth Galloway series from the first, and was eagerly anticipating this next entry in the series. “Was” is the keyword in that last sentence. Griffiths has gone from writing top-notch mysteries focusing primarily on Ruth’s role as a forensic anthropologist to writing sappy relationship novels that focus on Ruth as the “other woman” in a love triangle, successfully reducing her to a cliché. Why do writers do that? Jacqueline Winspear’s Maisie Dobbs series suffered from the same issue, but Winspear is finally bringing Maisie back around to detecting. Griffiths needs to do the same. Ruth Galloway is so much more than Nelson and Kate. Bring her back! Please!

Publication Date: May 13, 2018
Published By: Houghton Mifflin Harcourt
Thanks to Netgalley for the review copy

The Fairies of Sadieville by Alex Bledsoe – Another highly anticipated series entry from Alex Bledsoe that more than lived up to the anticipation. Begun with the Hum & the Shiver and concluded here, Bledsoe’s Tufa series is one of the most creative and well-written modern fairy tales out there. Bledsoe beautifully wraps up the story arc of an exiled tribe of Tuatha de Danaan living in Tennessee, providing closure to a number of stories included in the earlier books. We finally learn the one story that Bledsoe has never told – the origin story of the Tufa – and it’s fascinating, especially the little nugget of info from the King of Fairyland regarding the bet that landed the Tufa in Tennessee.  While I am sad that this is the last in the series, I am very much looking forward to the tales Bledsoe will spin next. I highly recommend the entire series.

Publication Date: April 10, 2018
Published By: MacMillan/Tor-Forge
Thanks to Netgalley for the review copy 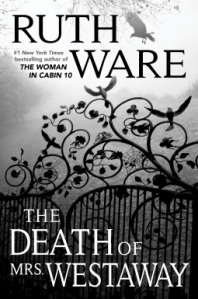 Death of Mrs. Westaway by Ruth Ware – Ruth Ware has done it again. The Death of Mrs. Westaway is an un-put-downable tale of family turmoil, long-buried secrets, and deception that will keep you up at night, reading just one more chapter…until you’ve devoured the whole thing in one sitting. Harriet “Hal” Westaway is a young woman making her living as a tarot reader on the Brighton Pier. She’s all alone in the world, having lost her mother in an unexpected accident when she was 18. Not only is she alone, but she’s also in debt. So when she receives a letter from an attorney informing her that she is a beneficiary in the will of  her grandmother Hester Westaway, she packs up her few belongings and heads to Cornwall, even though she believes the letter was sent in error. Her arrival sets in motion a chain of events begun decades earlier and brought to a grim conclusion here. Ware gives us an appealing protagonist, shifty characters, a questionable will, and the de rigeur treacherous housekeeper all wrapped up in a brooding Cornish mansion right out of Agatha Christie. One of the best I’ve read this year. Highly recommended.

Publication Date: May 29, 2018
Published By: Simon & Schuster/Gallery/Scout Press
Thanks to Netgalley for the review copy