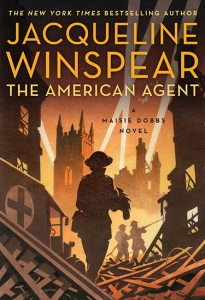 Winspear’s Maisie Dobbs is one of my favorite fictional characters and the series is one I recommend constantly. The American Agent signals the beginning of a new chapter in Maisie’s life, and is every bit as good as previous entries in the series.

Back to driving ambulances and deeply involved in saving lives during Hitler’s Blitz of London, Maisie is also waiting for a hearing to determine whether she can finally adopt Anna, the child refugee who entered her life in In This Grave Hour. Maisie and best chum Priscilla drive into the heart of the bombing every night, and meet intrepid “girl reporter” Catherine Saxon. Maisie senses a kindred spirit in the young woman, and is suitably distressed to discover that Catherine has been killed. Maisie is asked to look into Catherine’s death, given that she was the daughter of a prominent American senator. During her investigation, Maisie renews and intensifies her relationship with the American agent Mark Scott, first encountered in Journey to Munich.

Winspear has done a spectacular job in helping Maisie grow into a confident, brave, intelligent woman who has known tremendous heartbreak but has survived through grit and resilience. If it sounds like Winspear is tying up a number of loose ends here, she is and it is supremely gratifying. The mystery here is secondary to the bigger story of Maisie moving on with her life, although it is handled with the same cleverness and wit we have come to expect from Winspear.

The book itself is shorter than previous entries in the series, which made for a wonderful few hours immersed in 1940s London and Kent. Highly recommended.

One comment on “The American Agent by Jacqueline Winspear”

Reading for Fun: The Gethsemane Brown Mysteries by Alexia Gordon

Reading for Thinking: The Cookie Bible by Rose Levy Beranbaum