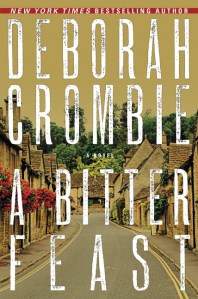 Synopsis: Scotland Yard Detective Superintendent Duncan Kincaid and his wife, Detective Inspector Gemma James, have been invited for a relaxing weekend in the tranquil Cotswolds, one of Britain’s most beautiful and historic regions, famous for its rolling hills, sheep-strewn green meadows, golden cottages, and timeless villages that retain the spirit of old England.

Duncan, Gemma, and their children are guests at Beck House, the country estate belonging to the family of Melody Talbot, Gemma’s trusted detective sergeant. No ordinary farmers, the Talbots are wealthy and prominent with ties to Britain’s most powerful and influential. A centerpiece of this glorious fall getaway is a posh charity luncheon catered by up-and-coming chef Viv Holland. After more than a decade in London, Viv has returned to her native Glouscestershire, making a name for herself with her innovative, mouthwatering use of the local bounty. Attended by several dozen of the area’s well-to-do, as well as national food bloggers and restaurant critics, the event could make Viv a star. A tragic car accident followed by a series of mysterious deaths could ruin her ascent. Each piece of information that surfaces makes it clear that the killer had a connection with Viv’s pub—and perhaps with Beck House itself.

I began this novel with some trepidation because I was disappointed by Crombie’s last entry in this series. After the first couple of pages, I knew this one was of the caliber I had come to expect from the author, and, truthfully, I could not put this down. The story is engaging, and the relationship between Duncan & Gemma is back on track. I enjoyed the foodie aspect to this mystery, as well as the idyllic Cotswalds setting. Learning more about Melody Talbot’s family was also a bonus.

Upon reflection, the “couldn’t put it down-ness” of this book *could* have stemmed from my fear that Crombie was going to kill off Duncan in the end. I am still smarting from James Compton’s death in the Maisie Dobbs series; I would have been crushed if Duncan died from complications from the car crash. THANK YOU, Deborah Crombie, for keeping him going!

Publication Date: October 8, 2019
Published By: William Morrow
Thanks to Edelweiss for the review copy

Reading: The God of Endings by Jacqueline Holland

Most Anticipated Fall Releases:  The Light We Carry by Michelle Obama

Most Anticipated of 2022: Fairy Tale by Stephen King