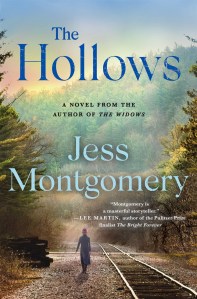 Jess Montgomery showcases her skills as a storyteller in this powerful, big-hearted and exquisitely written follow-up to her acclaimed debut The Widows.

Ohio, 1926: For many years, the underground railroad track in Moonvale Tunnel has been used as a short cut through the Appalachian hills. When an elderly woman is killed walking along the tracks, the brakeman tells tales of seeing a ghostly female figure dressed all in white.

Newly elected Sheriff Lily Ross is called on to the case to dispel the myths, but Lily does not believe that an old woman would wander out of the hills onto the tracks. In a county where everyone knows everyone, how can someone have disappeared, when nobody knew they were missing? As ghost stories and rumors settle into the consciousness of Moonvale Hollow, Lily tries to search for any real clues to the woman’s identity.

With the help of her friend Marvena Whitcomb, Lily follows the woman’s trail to The Hollows—an asylum is northern Antioch County—and they begin to expose secrets long-hidden by time and the mountains.

Jess Montgomery has delivered a tautly plotted and inventive sequel to The Widows, where we find Sheriff Lily Ross doing her best to fill the shoes of her murdered husband, Sheriff Daniel Ross. She’s trying to put her life back together, keep her family intact, and keep the county safe.

Lily finds herself facing a gruesome case when an elderly woman plummets from the top of a railroad tunnel into a moving train. The death sets in motion a whole series of events that uncover old secrets, murders, and deception that touches very close to home for Lily.

Montgomery’s writing is smooth and engaging, keeping you reading page after page. It is refreshing to read a good mystery set in the 1920’s and featuring a strong female protagonist that doesn’t involve high society and flappers. The addition of the historical elements of union organizing and the rise of the Women’s Ku Klux Klan lends a darker aspect to the story which sets this apart. Recommended for historical mystery fans.

Publication Date: January 14, 2020
Published by: Minotaur Books
Thanks to Edelweiss for the review copy

Reading for Fun: The Inheritance of Orquidea Divina by Zoraida Cordova

Watching: My Life is Murder

Most Anticipated Fall Releases:  The Searcher by Tana French; The Lighthouse by Christopher Parker