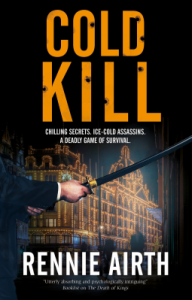 An American actress arrives in London to find herself the target of a ruthless assassin in this compelling standalone thriller.

Actress Adelaide Banks is swapping her native New York for London to spend Christmas with her widowed Aunt Rose. Rose wrote in her note that she was off to Paris for a few days and would be back in time for Addy’s arrival. But when Addy reaches Rose’s Knightsbridge address, no one’s home, and she has two unexpected callers . . .

Where is Rose, and what has she got herself entangled in? Dragged into a deadly game of cat-and-mouse on the snowy streets of London, Addy finds herself navigating a dark underworld of ruthless assassins, rogue agents and international crime. Can she survive long enough to uncover the truth?

I’ve been a fan of Rennie Airth’s John Madden series since River of Darkness debuted in 1999, so was curious to read this new stand-alone novel. I found a feisty female lead and a clever plot made even more captivating by the cast of memorable characters and a surprising ending. What a treat!

Airth steps away from Madden’s post-WWI world and ventures into international intrigue with a modern story that is every bit as good as his earlier work. I often envision stories on the screen, and could easily see John Madden in a BBC mystery series on television. Cold Kill, however, is a full-on, big screen spy thriller on par with the Bond and Mission: Impossible franchises. Will appeal to fans of Girl with the Dragon Tattoo.

Publication Date: May 5, 2020
Published By: Severn House
Thanks to Netgalley for the review copy