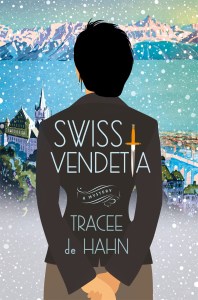 You know the old adage “Never judge a book by its cover?” Well, it was far from top of mind when I spotted this beauty buried in the Mystery section at Barnes & Noble a few weeks ago. Hadn’t heard of the author. Wasn’t discounted. Set in Switzerland. But the cover! It called to me. So, I bought it.

What I found was a first-in-a-series, gently meandering but totally clever whodunit featuring the completely likable Inspector Agnes Luthi, charming aristocrat Julien Vallotton, and a cast of memorable characters.

We meet Agnes as she negotiates rapidly deteriorating roads, attempting to reach the grand Chateau Vallotton in the middle of the worst snow & ice storm Lausanne, Switzerland has seen in decades. The body of a young woman has been found outside the chateau, and Agnes is called to investigate her first case in the Violent Crimes Unit of the Lausanne Police Department. She manages to reach the chateau, where she finds herself snowed in with two fellow detectives, members of the Vallotton family, and assorted other characters, one of whom is most definitely a murderer. Even while she is neck deep in the murder, we find that Agnes is also wrestling with some personal tragedy. Her investigation becomes her own catharsis, leading to a very satisfying ending.

The author manages to weave Agnes’ personal tragedy into the story, so that the reader begins to know Agnes at the same time Agnes begins to know her suspects. Agnes herself is a welcome female protagonist, a professional woman who is also a mother trying to do the best she can and not always succeeding. This is one of those unusual mysteries that ride the rails between “cozy” and “hardboiled” detective fiction, which is a niche in which I will happily hide. In some ways, Agnes reminded me a bit of Martha Grimes’ Richard Jury, if that character had been female. I was delighted to find out that this is, indeed, the first in a series. The second in the series, A Well-Timed Murder, is scheduled for release in February 2018. Here’s hoping to finding an advanced reading copy!